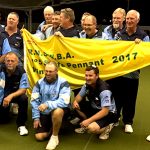 Bargo Men’s Bowling Club is now officially the little club that roared. After having conquered clubs much bigger than itself in Zone 5 (Greater Western Sydney) to qualify for the 2017 state finals, Bargo went all the way on the weekend. It defeated Beresfield in a dramatic final at SoldiersRead more »