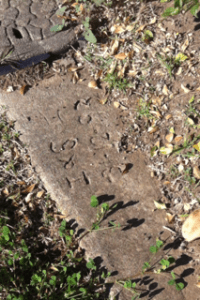 Set in concrete: Ivan Milat’s and sister Shirley’s initials are carved in this path in the home they shared in Cinnabar Place, Eagle Vale, where the backpacker killer was arrested in May 1994.

A little more than 25 years ago, in Cinnabar Street in Eagle Vale, a quiet, unassuming little residential street on the western side of Campbelltown, a major police operation in NSW took place.

It was early in the morning in May, 1994 and more than 50 police officers surrounded the house shared by Ivan Milat and his sister Shirley Soire.

Milat was arrested and charged with the murder of seven backpackers in Belanglo Forest and is now serving life in Goulburn jail, his file marked “never to be released’’.

Many of the neighbours have since talked to the media about what Milat and his sister were like.

One  family, who built their home behind  Milat’s some time after the arrest, recently noticed a concrete path in the front yard bearing the initials of Ivan and Shirlery and dated 1993, a year before the police swooped.

Milat may be long gone from Cinnabar Street, Eagle Vale but the evidence he was there for a time lives on for the time being.

More than 40 years experience in the news media, most of them as editor of local newspapers across the Sydney metro area, but a few years working as a sub-editor with the metros. Lots of awards, both as a reporter and editor, but says he values just as much Community Service Awards from Campbelltown City Council in 2004 and 2016. Took a voluntary redundancy in 2014 from Fairfax Community Newspapers after 21 years there. Loves the digital world, because ''there's no question it's the future''. Eric promises his hard hitting but fair approach won't change when he reports the news via cyber space.
View all posts by Eric Kontos
Community urged to back tree planting day
Stallions falter at the finish but Eagles flying high