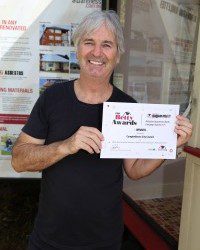 Well done: Actor John Jarratt, who is an ambassador for Asbestos Awareness Month Campaign, with the award for Campbelltown City Council.

Campbelltown City Council has won a national award for its asbestos awareness campaigns.

Campbelltown was named winner of the Betty Award for most active asbestos awareness month council campaigner in a metropolitan area in the past 12 months.

The national awards are presented by the Asbestos Education Committee (AEC) in partnership with the Asbestos Diseases Research Institute (ADRI) for significant contribution to community education during national Asbestos Awareness Month.

The awards are announced during Global Asbestos Awareness Week (April 1-7).

To put Campbelltown City Council’s award in perspective, out of 563 councils across Australia, 343 (61 percent) registered their participation.

“This award recognises council’s commitment to helping to highlight the safety risks associated with asbestos, educating the wider community and encouraging residents to learn more before embarking on renovation projects that could put them at risk.”

The annual Betty Awards (named after Betty the ADRI House), are designed to recognise the outstanding commitment of organisations as being community leaders that have gone to extraordinary lengths to work with the AEC in educating their communities about asbestos.

“Key to the campaign’s success is the invaluable contribution of stakeholders and community leaders such as Campbelltown City Council who are able to reach out directly to their community to help them better understand asbestos and educate them on safe practices,’’ he said.

“With one in three Australian homes containing asbestos in some form or another, with this invaluable support of councils together we are educating more Australians than ever before about the dangers of asbestos and how to manage it safely.

“In presenting this award to Campbelltown City Council we not only recognise their efforts as one of Australia’s leading asbestos awareness campaigners, we also hope this level of participation and high standard of achievement will demonstrate to other councils the importance of becoming more involved and in doing so, realise significant health benefits to their communities,” Mr Dunphy said.

Not only fibro homes contain asbestos. Asbestos products can be commonly found in and around brick, weatherboard, clad and fibro homes built or renovated before 1987 so it’s vital that our message reaches as many homeowners, renovators, tradesmen and handymen as possible.

“A high volume of asbestos-containing building products used prior to 1987 still remain hidden dangers in homes and buildings such as garages and farm structures so the support provided by Campbelltown City Council is vitally important in helping Australians to become asbestos aware,” Mr Dunphy said.

Since launching asbestosawareness.com.au in 2012, the campaign has gone from strength-to-strength to become a national awareness and education program providing easily accessible resources enabling governments at all levels, associations, asbestos support groups, research organisations, corporates, small businesses and the media to inform communities about the dangers of asbestos and how to manage it safely.

“Thanks to the incredible support of a record number of organisations from all corners of Australia who participated in national Asbestos Awareness Month, this vital and potentially life-saving message was able to reach more Australians than ever before,” Mr Dunphy said.

More than 40 years experience in the news media, most of them as editor of local newspapers across the Sydney metro area, but a few years working as a sub-editor with the metros. Lots of awards, both as a reporter and editor, but says he values just as much Community Service Awards from Campbelltown City Council in 2004 and 2016. Took a voluntary redundancy in 2014 from Fairfax Community Newspapers after 21 years there. Loves the digital world, because ''there's no question it's the future''. Eric promises his hard hitting but fair approach won't change when he reports the news via cyber space.
View all posts by Eric Kontos
Wests Tigers name unchanged side for trip to NZ
Off with the business suits and on with the boxing gloves