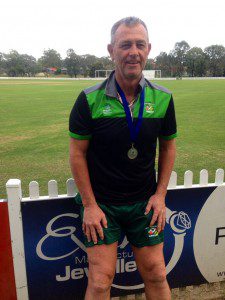 Ghosts wicketkeeper Todd O’Keefe, 53, was named man of the match in the fifth grade grand final at Raby.

An extraordinary man of the match performance by 53 year old wicketkeeper Todd O’Keefe was the backbone of the grand final win by the Campbelltown Camden Ghosts fifth grade over Eastern Suburbs.

Just a few moments ago at Raby #1 the Ghosts scored the 98 runs for victory in their second innings to wrap up the premiership, having lost just three wickets in the process.

A handy contribution from 16 year old opener Vincent Hreszczuk, who made 36 before being dismissed, paved the way for an outright victory.

But it was that ageless man behind the Ghosts stumps, Todd O’Keefe, who inspired the team of mostly youngsters to grand final glory.

His work behind the stumps was awesome, and saved a stack of runs that could have turned the match the other way.

O’Keefe also scored a handy 27 runs in the first innings, a valuable contribution in a low scoring match. He wasn’t required to bat in the second dig.

He also had a stumping against his name as well as a catch in the first innings. 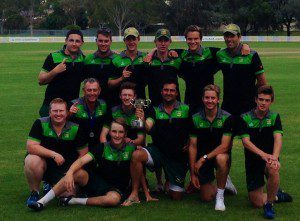 Glory, glory to the Ghosts: the boys celebrate after their great victory over Easter Suburbs

Earlier today the Ghosts squeezed out a four run lead before they were dismissed in their first innings by Easter Suburbs.

The visitors needed to score heavily and quickly in the second innings, which was always going to be a risky strategy, and as it turned out indeed it was.

Easts reached 101 before being dismissed, a lead of 97.

They must have lifted when they took an early wicket, that of opener Cameron Binskin, who fell for 1, but Hreszczuk and Appleton (30) steadied the ship and the Ghosts were just about home by the time these two lost their wickets.

For the Ghosts, this was fitting reward for a great year in which they were clearly the best team, having also won the minor premiership.