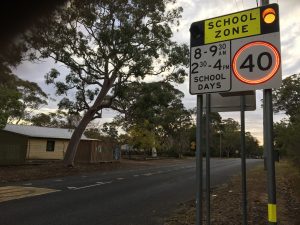 You see a lot more when walking, as opposed to driving.

Along the route of my morning walk is our local primary school.

Naturally it has a 40km/h zone and flashing lights at each end of it.

As a pedestrian along this place, I am very happy to report that 90 per cent of motorists do the right thing and slow down along the designated school zone.

To these fellow citizens I say, thank you, and I am sure the students at this school and their families also thank you for your consideration.

I don’t need to tell you the bad news – what the other 10 percent do or rather don’t do.

It’s obvious they’re the same people you see most days on our roads; they’re the ones who seem to be in a hurry to get to their destination.

But what they forget to realise when they speed through school zones putting lives at risk is that it takes just a few seconds extra to slow down to 40km/h.

A few seconds more – is that worth the life of a child?

It could be your child one day.

It’s obvious there are fellow human beings who seem to think they live in a bubble and never consider the needs of other people.

There are no obvious ways to make them change their blinkered approach to life.

School zones have helped save lives, but it would be even better if everyone slowed down and not just the 90 percent that do so.

One thing that may encourage more people to slow down is having police check in on school zones on a regular basis – and book anyone who doesn’t slow down.

We’ve all seen the police along or near school zones, but it’s a rare event.

Busy as our hard working police officers are, surely they can make the effort on this front.

More than 40 years experience in the news media, most of them as editor of local newspapers across the Sydney metro area, but a few years working as a sub-editor with the metros. Lots of awards, both as a reporter and editor, but says he values just as much Community Service Awards from Campbelltown City Council in 2004 and 2016. Took a voluntary redundancy in 2014 from Fairfax Community Newspapers after 21 years there. Loves the digital world, because ''there's no question it's the future''. Eric promises his hard hitting but fair approach won't change when he reports the news via cyber space.
View all posts by Eric Kontos
Gladys heading to defeat, especially if Labor lose Foley
How having a digital medical file can ease the pressure