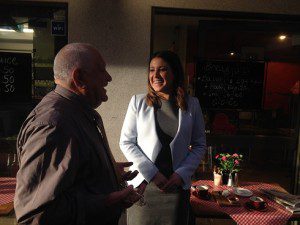 Sprung: Ok, fess up, what’s going on here between this councillor and the TV journalist?

We snapped veteran Campbelltown councillor Fred Borg with one of the town’s famous exports, Kentlyn’s Julieanne Horsman at the Centrale Café &Bar in the Skygardens Arcade, which is adjacent to Queen Street.

Ms Horsman is of course a Channel 9 journalist but returns to the family home every chance she gets. She worked locally with the radio station C91.3.

As for Cr Borg, he’s getting ready for another annual mayoral change that almost certainly won’t involve him, although he’d love to do the job.

Maybe he has the wrong people backing him, but time will tell.

He did tell the South West Voice that if he ever got the job “I wouldn’t let Campbelltown down’’.

More than 40 years experience in the news media, most of them as editor of local newspapers across the Sydney metro area, but a few years working as a sub-editor with the metros. Lots of awards, both as a reporter and editor, but says he values just as much Community Service Awards from Campbelltown City Council in 2004 and 2016. Took a voluntary redundancy in 2014 from Fairfax Community Newspapers after 21 years there. Loves the digital world, because ''there's no question it's the future''. Eric promises his hard hitting but fair approach won't change when he reports the news via cyber space.
View all posts by Eric Kontos
Green Army marches on in Macarthur
Clay skulls honour those who passed away