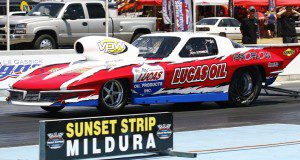 Camden’s Jason Stares was among a trio of first time Christmas Tree winners in round 5 of the Summit Racing Equipment Sportsman Series.

Stares picked up his very first ANDRA Christmas Tree, beating off a challenge from Paul Russo on the weekend at Mildura.

“I can’t explain how it feels, it’s unbelievable,” said an emotional Stares.

“So many years, Super Sedan, Top Sportsman all for this, and finally we’ve done it.

“I’ve got to thank my uncle Bob, my father in law Michael, my wife and kids who usually come with us, and great sponsors, we can’t do it without them. VPW, Pro Flow, Lucas Oil Sunoco race fuel, they make it so much easier.”

Stares defeated Julian Carafa and Phil Yfantidis to set up his winning run.

Coming off two wins from two this season, Craig Geddes was the man to beat in Mildura Gateway Tavern Super Comp but reigning Super Stock champion Steve Norman (Whyalla, SA) had other ideas in a Patterson Racing versus Bob Book Enterprises showdown.

• The Summit Racing Equipment Sportsman Series next moves onto Calder Park Raceway for Round 6 on Saturday, December 27.

More than 40 years experience in the news media, most of them as editor of local newspapers across the Sydney metro area, but a few years working as a sub-editor with the metros. Lots of awards, both as a reporter and editor, but says he values just as much Community Service Awards from Campbelltown City Council in 2004 and 2016. Took a voluntary redundancy in 2014 from Fairfax Community Newspapers after 21 years there. Loves the digital world, because ''there's no question it's the future''. Eric promises his hard hitting but fair approach won't change when he reports the news via cyber space.
View all posts by Eric Kontos
More than Ghost of a chance for victory
Green Army tackle river land