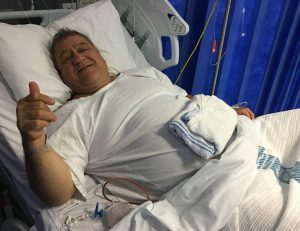 Eye opener: Your reporter, who is always on duty, even when he is about to go under the knife to have two hernias removed at Campbelltown Hospital.

These days a media story about hospital waiting lists or a patient left in a corridor for a period of time does not have the impact they once had.

That isn’t because they’re not important issues anymore.

No, it’s all to do with the way the media presents the “news’’ and the 24 hour cycle – which is probably now just 12 hours.

But it’s also about the way media consumers consume modern media – with a healthy dose of cynicism.

And who’s to blame them, knowing stories about waiting lists or anything the current opposition can use is more or less for political purposes.

And when the opposition wins office, they just swap places – it’s the nature of the beast.

We all know there’s just not enough money and resources have to be prioritised in health as well as everywhere else.

So when an ageing reporter like me walks into Campbelltown Hospital 356 days after being ”inducted” into the elective surgery waiting list by Dr Andrew Ong on November 9, 2016, well, this is an opportunity not to be wasted.

It’s not quite gonzo journalism and I am definitely no Hunter S Thompson, but I do enjoy writing about unexpected situations like the one that greeted me yesterday morning.

Tuesday, October 31, meant that’s nine days short of a whole year of waiting for the big day, but hey, who’s in a hurry to go under the knife? Not me, that’s for sure.

I’m up for a hernia operation and my stay will be around 24 hours, Dr Ong informs me when we meet in the pre-op room.

But you’d expect the consultant surgeon to be impressive, working as he was on public patients.

But what caught my attention was the absolute professionalism of every staff member I came into contact with from the moment I walked through the doors of Campbelltown Hospital on Tuesday morning.

They were welcoming, friendly and, most of all, very, very professional.

After being there for 24 hours or so I would add hard working and dedicated.

After all the negative media even I have consumed over the years – many, many years I assure you – this was a totally unexpected picture that greeted me; it really hit me for six, in a very pleasant way and naturally I felt chuffed about it.

Next day, after a wonderful breakfast, all the hernia operation patients are sent on their way.

But we had time to compare notes and everyone is in agreement: this was a great advertisement for public hospital services.

All that’s needed is for whoever holds the purse strings to make sure these wonderful health professionals have whatever it is they need to keep looking after us.

More than 40 years experience in the news media, most of them as editor of local newspapers across the Sydney metro area, but a few years working as a sub-editor with the metros. Lots of awards, both as a reporter and editor, but says he values just as much Community Service Awards from Campbelltown City Council in 2004 and 2016. Took a voluntary redundancy in 2014 from Fairfax Community Newspapers after 21 years there. Loves the digital world, because ''there's no question it's the future''. Eric promises his hard hitting but fair approach won't change when he reports the news via cyber space.
View all posts by Eric Kontos
Fisher’s Ghost carnival adds fun factor to festival
Check out Scum Ballet yourself to see what it’s really about