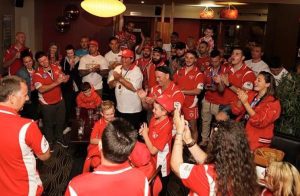 East Campbelltown Eagles are the 2016 Sydney Shield premiers after defeating Mounties 32-24 at Pirtek Stadium in what was an incredibly entertaining game of Rugby League, reports Matt Buxton.

Michael Stevens earned the man of the match honours for a special Grand Final performance, but he could not have done it without their forwards that worked tireless all afternoon to earn the Eagles their second premiership in just three years as part of the Sydney Shield competition.

The Eagles had the first try-scoring opportunity, and Ron Palumbo ran a great line to get over the line, but was held up in the tackle.

Mounties got out of trouble with a penalty, and when a right-to-left shift got out to Shannon Chapman, he took advantage of the fractured defence to steamroll over the line and get the ball down for the first try of the afternoon.

Some Michael Stevens magic led to the Eagles’ first try, and subsequently locked up the scores at 6-all.

Stevens took the line on, showed the ball on his inside, and then threw a miraculous long over-head pass as he was falling to put an unmarked Ben Baker over in the corner.

Mason Talolua injected himself into the contest with a powerful line break, only to be brought down just short of the line, before a dropout was forced off the ensuing play. 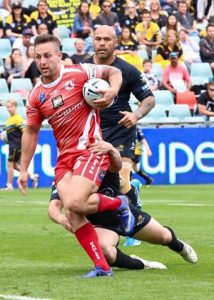 The Eagles were too good for Mounties.

The pressure was building for the Eagles, and another piece of magic set up the next try when a fourth tackle cross-field bomb was put up, only for the big front rower, Guy Thompson, to take the ball in the air and flick the ball out the back for Samu Sauvao to pick it up and extend their lead to 12-6.

Two remarkable tackles by Craig Moustakas and John Da Silva denied two Mounties possible tries in the same set, but it would not be third time lucky when Luke Speechley crashed over off the back of a Maika Sivo linebreak.

Both teams then bombed a genuine try-scoring opportunity each within the space of 60 seconds, with Wade Dunley dropping the ball as he charged into a hole, and Brad Speechley not passing to Horton who supported his linebreak but had nobody in front of him.

The Eagles earned a penalty in front of the posts and took the two points on offer, and that was the last scoring play of an action-packed half of Rugby League.

It did not take the Eagles long to cross in the second half, thanks to an incredible right-hand flick-pass from Ron Palumbo to Amanono Tovio, who crashed over for the four pointer.

Mounties responded immediately, and had the chance thanks to a Brad Speechley line break that got them into good field position.

A few tackles later, Luke Cauchi took advantage of tired markers and defenders by scoring a simple try from dummy half.

Alec Susino pulled off a bone-rattling try-saving tackle, which was a small part of the mountain of defence that Mounties had to deal with in the final stages of the match.

Eventually, the pressure got to the Mount Pritchard boys, as Stevens saw a gap and hit the accelerator to run through and score a vital try that nudged them out to an eight point lead with 12 minutes remaining.

Mounties gave themselves a chance with four minutes remaining, when Brad Speechley took it to the defence, and threw a Hail Mary pass over his head. Fortunately, it bounced in the direction of Fou Tagiilima, who planted the ball down to reduce the deficit to 26-24.

In response, the Eagles’ ever-reliable captain, John Da Silva, crashed over from dummy half to score the Grand Final winning try.

After receiving the Sydney Shield premiership trophy, the Eagles players and supporters headed home and major sponsor, Bradbury Hotel, and the celebrations were well and truly under way.

We are the champions: The Eagles at Pirtek Stadium after receiving the Sydney Shield