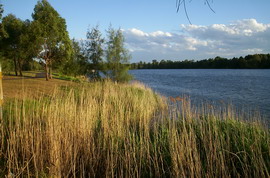 Mansfield Creek and Spring Creek, St Helens Park in Campbelltown and Riverside Park, Chipping Norton in the Liverpool area are some of the Georges River bushland areas to be  restored by an Aboriginal Bush Regeneration team.

The team is made up of four Aboriginal trainees, an Aboriginal project manager and a supervisor have been employed by Eco Logical Australia Pty Ltd as a mobile team working to improve biodiversity across the catchment. The project will also provide the trainees with the opportunity to work towards the attainment of qualifications in Conservation Land Management over the next 18 months.

The GRCCC will work in partnership with representatives from the Local Aboriginal Land Councils (LALCs) within the Georges River Catchment to encourage the sharing of traditional ecological knowledge with the trainees and build understanding and awareness of Aboriginal cultural heritage values.

“Funding for this project is a significant recognition of the value that regional partnerships can bring in coordinating long-term environmental restoration,” said GRCCC Chairperson Councillor Naji Peter Najjar. “The GRCCC is proud to stand together with LALCs on a project which fosters environmental resilience and community empowerment.”

The Aboriginal Bush Regeneration Team will target their work to restore and improve biodiversity at key sites within eight Local Government Areas in the Georges River catchment.

The sites selected by the GRCCC’s eight participating member councils are important high priority corridor areas, recognized for their high value as critical estuarine and riparian areas in the catchment. Nominated on ground works throughout the eight GRCCC participating member council LGAs include control of invasive weeds, revegetation, regeneration and erosion remediation works.

More than 40 years experience in the news media, most of them as editor of local newspapers across the Sydney metro area, but a few years working as a sub-editor with the metros. Lots of awards, both as a reporter and editor, but says he values just as much Community Service Awards from Campbelltown City Council in 2004 and 2016. Took a voluntary redundancy in 2014 from Fairfax Community Newspapers after 21 years there. Loves the digital world, because ''there's no question it's the future''. Eric promises his hard hitting but fair approach won't change when he reports the news via cyber space.
View all posts by Eric Kontos
Plenty of school holiday activities
Here’s cheers to a new edition of A Top Drop