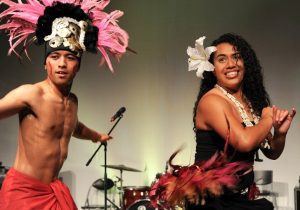 Oceanic Rhythms – Sounds of the Pacific returns to the Campbelltown Arts Centre on September 16.

Campbelltown is home to a large number of residents with a Pacific Island background.

So it’s no surprise to see the return of the successful Oceanic Rhythms – Songs of the Pacific to the Campbelltown Arts Centre later this month.

The centre has teamed up with the Sydney Sacred Music Festival to host this wonderful night of music and culture.

Western Sydney based musicians from Samoa, Tonga and Fiji will pay respect to the past by performing Pacific music and share stories as part of this year’s Songs of the Pacific gig.

There will be vocal performances from Maybelle Galuvao, Ilisavani Kava and V Tribe.

These very special musicians and performers will combine forces to create a path for the future of Pacific culture in Sydney by sharing new and original creations, says the event’s curator MC Trey.

Oceanic Rhythms will also feature a performance by MC Trey herself.

Long established as a prominent artist within hip-hop and urban music in Australia, Trey’s Fijian heritage and musical upbringing sees her perfectly placed as the curator of Oceanic Rhythms.

“This year sees Oceanic Rhythms return to Campbelltown Arts Centre with some of the country’s finest Pacific artists,’’ says Trey.

“We are excited to share our renditions of Pacific classics as well as new music from Samoa, Tonga and Fiji.’’

Pacific foods and drinks will be available for purchase on the evening.

WHAT Oceanic Rhythms – Sounds of the Pacific

WHEN Saturday, September 16 between 7pm and 9pm