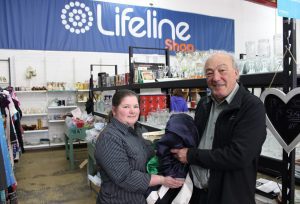 There’s no doubt volunteering puts the icing on a community’s cake.

The more volunteers, the better the community.

Someone who’s seen volunteers up close and personal is Dr Mike Freelander.

While he’s been our man in Canberra for the past two years, for 30 years before that he was a local paediatrician and in that capacity he came to know and appreciate the special value volunteers bring to a community.

“I’ve seen firsthand the selflessness and kindness of these volunteers,’’ says Dr Frelander.

“I’ve worked alongside many volunteers during my time as a paediatrician and an MP.

“The services they provide for our community are invaluable and deserve to be recognised.”

In Australia, more than six million people volunteer every year.

Macarthur is home to many of these volunteers as well as the charity and non-for-profit organisations that allow this work to come to fruition.

Dr Freelander says that because too often the efforts of volunteers go unrecognised, he wants to do something about it.

“I am immensely proud of the volunteer effort in Macarthur,’’ he said.

“There are many organisations that are vital to our Macarthur community which are run off the backs of our generous volunteers.’’

Dr Freelander will hold a volunteer awards day to thank and recognise the volunteers of Macarthur.

He is asking local organisations to nominate worthy volunteers to receive a certificate of appreciation, for volunteers based in the Macarthur region.

“This is a unique opportunity to say thank you to the many selfless men and women who contribute so much to the community, making the Macarthur region such a fantastic place to live and work,’’ he said.

The awards ceremony will be held on November 22 – International Volunteer Day.

If you would like to nominate a worthy volunteer to receive Mike’s Certificate of Appreciation, visit https://drmikefreelander.com.au/event-noticeboard/volunteer-recognition-day/ and submit the application online.

If you have any questions regarding the certificate of appreciation or the application process, please contact Dr Freelander’s office on 4620 0293 or email Mike.Freelander.MP@aph.gov.au

Always look to the bright side of life, footy fans
Restoration drive for forgotten rainforest in Macarthur’s backyard