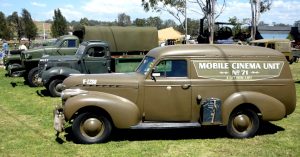 The third Macarthur Military Muster will be on July 14-15 this year.

The only event of its kind, the muster will see military clubs and societies from throughout NSW gather at the Campbelltown Steam and Machinery Museum at Menangle Park – just one hour from the Sydney CBD.

Battle re-enactments, train and wagon rides, food stalls and the largest historical military display of the event’s short history will all be part of this year’s Menangle Military Muster.

The first ever Military Muster was held in July 2016, and attracted families, car enthusiasts, history fanatics and people of all ages from the Macarthur region and further afield.

A host of historic military vehicles will again be displayed this year, including jeeps, motorbikes, trucks, tanks and helicopters.

As the event includes military history of all eras, displays will cover everything from medieval times to the present day.

Fittingly, the Menangle Military Muster is a fundraiser for Legacy, a charity dedicated to helping the families of those who gave their lives in military service.

Train and wagon rides will be available by gold coin donation and there will also be food stalls and free barbecue facilities.

Public entry is $10 per adult and a gold coin donation for children under 12 years of age.