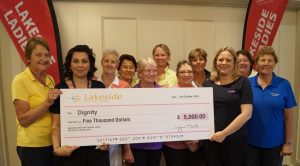 The Lakeside Lady Golf Club Members annual Tee up for life charity golf day is not about who finishes first.

It’s about much more than just winning, with proceeds, as the title suggests, going towards a local charity doing good deeds.

This year’s Tee up for life charity golf day was held at Camden Lakeside on a Wednesday earlier this month and the beneficiary was a charity called Dignity, which helps local homeless people.

With 21 golf clubs entering teams in the competition, the day was always going to be a big success and so it was.

For the record, one of Lakeside Golf Club’s own teams were the winners on the day, with Jan Jacka, Judi McKechnie, Shane Murray and Mary Irvine all having a great day out in arguably the best golf course in South West Sydney and Macarthur.

The golf day and the ladies luncheon that followed raised $5,000 this year, which was presented to a representative of the Dignity charity on the day by the president of the Lakeside Lady Golf Club Members, Lyn Hall.

Dignity was established by Suzanne Hopman and Michelle Mulvihill in 2015 with the aim of assisting homeless people have a smooth transition into permanent housing.

Dignity has a number of shelters in the Macarthur area where they accept people and provide a sense of grace and dignity to those suffering hardship.

The charity also helps out with accommodation, food and advocacy.

Thanks to the Lakeside Lady Golf Members and their fundraising efforts with another successful annual charity event at Lakeside Golf Club Camden, Dignity can continue helping those less fortunate than the rest of us.

Outrage over assault of staff, patients and visitors in our hospital
Call to bring discarded airconditioned carriages to Macarthur line