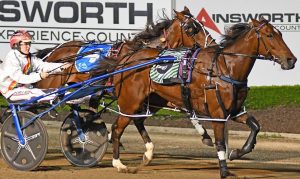 Talented young driver Isobel Ross etched her name in the harness racing history books on Saturday at Club Menangle with a feat which is unlikely to be matched any time soon.

She became the first quadruplet to drive a winner at harness racing headquarters, during her first drive at the Menangle circuit, reports SEAN CUNNINGHAM, of the National Trotguide.

Born nine weeks premature in 1997, Ross, who celebrated her 21st birthday in October, was given the chance to drive on Saturday while Turnbull contested the Inter Dominion heats in Victoria.

She overcame her nerves and the wide draw, battling bravely up the home straight to win with the six-year-old mare, which ran a career best time of 1:51.6 seconds.

“I was definitely nervous as it was my first race there (Menangle) and it was a big race too,” Ross said.

“It was very exciting because I never dreamt that my first drive at Menangle would be winning a Group race.

“I wasn’t confident we’d win until I crossed the line.

“I thought the one on the inside (Rocker Band) was going to catch us, but I knew I had a tough mare that would dig in.

“It was my second Group win, but still definitely a special one as it was my first drive at Menangle.

“I was lucky to get the opportunity to drive and the owners were happy to put me on it.”

Striving to make a name for herself in NSW, Ross comes from a family who are well known in Queensland, renowned for conducting clerk of the course duties as “redcoats”, at tracks in the state’s south-east.

Ross’ proud mother Lisa believes her daughter has what it takes to become a successful trainer.

“I think her favourite part would be the training,” Lisa said.

“We’ve helped her since the mini-trotters and she fell in absolute love with it.

“We made sure she kept going with it, but that was easy as she was doing something she loves.

“She’s been privileged to have worked with a few trainers in Queensland and has learnt something new each time.

“That’s how to get experience so she can get better and better.”

More than 40 years experience in the news media, most of them as editor of local newspapers across the Sydney metro area, but a few years working as a sub-editor with the metros. Lots of awards, both as a reporter and editor, but says he values just as much Community Service Awards from Campbelltown City Council in 2004 and 2016. Took a voluntary redundancy in 2014 from Fairfax Community Newspapers after 21 years there. Loves the digital world, because ''there's no question it's the future''. Eric promises his hard hitting but fair approach won't change when he reports the news via cyber space.
View all posts by Eric Kontos
Heat sensors first step in bid to cool our suburbs
Green light for high rise building next to school, historic church