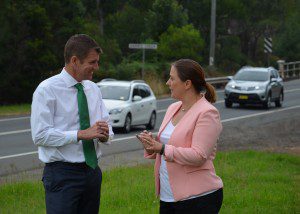 NSW Premier Mike Baird and local member Melanie Gibbons have announced $4 million to get the upgrade of Heathcote Road ‘shovel ready’ between Infantry Parade Holsworthy and The Avenue at Voyager Point.

“This is great news for thousands of motorists who use Heathcote Road every day,” Mr Baird said.

“We are determined to get this project ‘shovel-ready’ so we can hit the ground running to widen Heathcote Road from two to four lanes, including widening the notorious traffic bottlenecks at Harris Creek Bridge and the bridge over Williams Creek.

“Unlike Labor, which has no plans to relieve our suburbs of congestion, we have the funding and determination to tackle major points of congestion like Heathcote Road.

“Melanie Gibbons has been pushing hard for this project to be delivered and I’m delighted this next stage will proceed.”

Ms Gibbons said this was an important milestone in order for Heathcote Road to be widened.

“Heathcote Road is a major arterial road providing access from Liverpool to Wollongong for locals with access to residential suburbs and the Department of Defence at Holsworthy,” Ms Gibbons said.

“We will need to work on three bridges so it is a big task, but taking away these bottlenecks will make a huge difference by reducing the frustration from being stuck in traffic.

“Following earlier investigations last year, we can now get on with the job of undertaking detailed design, environmental assessment and approvals.

“This upgrade is something that people ask me for regularly, and that the community has been long hoping for so I’m proud the Baird Government is listening and delivering what the community needs.”