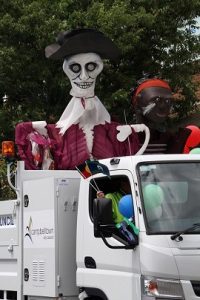 Fright time: Time is running out to enter a float in this year’s Fisher’s Ghost Festival parade.

If you’re looking for a frightfully good time, don’t miss your chance to be part of Campbelltown’s biggest community event of the year – the 2016 Festival of Fisher’s Ghost during November 4-13.

Crowds line Queen Street each year to experience the energetic, colourful and diverse parade which reflects our community spirit, and has come to be seen as the official opening of the 10-day festival.

Entry is free and prize money will be up for grabs for best parade entries across a range of categories.

Local businesses and community groups are also invited to connect with residents and visitors by hosting a stall at the Street Fair on Saturday, November 12 from 10am to 2pm.

A creative and eclectic mix of around 100 stalls will entice shoppers to Queen Street to enjoy the tasty food, show bags, handmade jewellery, home and lifestyle products, fashion, and lots more.

Meanwhile, Mawson Park will be transformed into a fun zone for families with a hive of entertainment including a jam-packed program on stage, featuring Kung Fu Panda and The MacDaddy Duo, plus an animal farm, craft stalls and inflatable play.

Fred is calling on everyone to be part of the legend of Fisher’s Ghost!

For conditions of entry, or to apply to be part of the Street Parade or Street Fair, visit the Fishers Ghost website here.

More than 40 years experience in the news media, most of them as editor of local newspapers across the Sydney metro area, but a few years working as a sub-editor with the metros. Lots of awards, both as a reporter and editor, but says he values just as much Community Service Awards from Campbelltown City Council in 2004 and 2016. Took a voluntary redundancy in 2014 from Fairfax Community Newspapers after 21 years there. Loves the digital world, because ''there's no question it's the future''. Eric promises his hard hitting but fair approach won't change when he reports the news via cyber space.
View all posts by Eric Kontos
Memorable flourishes at start of new era in Campbelltown
Golfers tee off at Camden with one eye on history