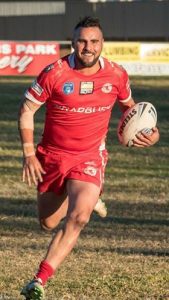 Flying high: Chris Standing running in the last try for the Eagles in the big 42-16 win over Guildford a Waminda Oval on Sunday.

East Campbelltown have sent another signal they will be a force in this year’s Sydney Shield rugby league competition by disposing of Guildford at Waminda Oval on Sunday.

The Eagles share the competition lead on the ladder with Wenty and S Marys, all three on 14 points.

Just two minutes after the start, Campbelltown’s Jarryd Eggleton crashed over for the first try and Shannon Gallant converted for a 6-0 lead.

The visitors hit back 12 minutes later to level the score.

But the Eagles responded with tries to back rowers Grant Lahey and Kobe Chamblain to race to a 18-6 lead.

When Shannon Gallant bagged a try and converted it the home side were able to head to the sheds at the break with an imposing 24-6 lead.

The second half half didn’t start well for the Eagles when an unlucky bounce resulted in a Guildford winger running 80 metres to score out wide to reduce the deficit to 24-10.

A Daniel Muir try helped Campbelltown extend their lead to 30-10.

Guildford again hit back with a converted try but two more tries meant the Eagles sailed home winners at 42-16.

In a great kicking display, Shannon Gallant kicked seven from seven for a total of 18 points for the former Wests Tigers custodian, who was named players’ player for the Eagles.

Man of the match award went to skipper Mason Talolua.

The Eagles will enjoy a much needed break before taking on Penrith Brothers in a fortnight’s time.

In football, the Macarthur Rams have sunk to the bottom of the ladder after they were smashed 5-1 at home by Canterbury Bankstown on Saturday night in round 13 of the NPL Men’s 2 premiership.

The Rams, who are now last on the ladder, host Blacktown Spartans at Lynwood Park in round 14 this Saturday night from 7pm.

In the AFL Sydney Premier Division, Camden Cats have returned to the winners’ circle after defeating UNSW Eastern Suburbs Bulldogs by four goals, 14.6-90 to 10.11-71 at Henson Park.

In round 8, the Cats are away to Western Suburbs Magpies at Picken Oval this Saturday. Kick off is 2pm. 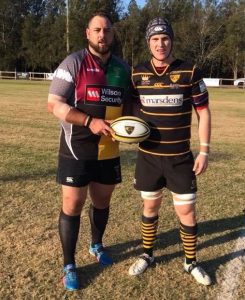 Back to Camden day ended in a 22-12 win for Camden Rams over cross town rivals Campbelltown Harlequins on Saturday night.

Camden Rams have bragging rights after defeating Campbelltown Harlequins in the local rugby derby on the weekend.

Camden won the Illawarra Rugby premiership round seven clash – also known as Back to Camden day – 22-12.

Neither Macarthur club looks like seeing semi final action this year, though, with both bringing up the rear on the Illawarra competition ladder.

The Harlequins are last after just one win, while Camden are third last, with two wins so far.