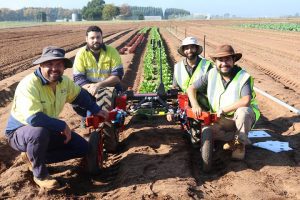 Greater Sydney growers will be the first to get a glimpse of a newly developed “digital farmhand” robot.

A live demonstration of the low cost prototype robot developed by The University of Sydney’s Australian Centre for Field Robotics (ACFR) will be the highlight of an upcoming field day later this month.

The workshop, to be run by Greater Sydney Local Land Services, will focus on managing soil borne disease on veggie farms using the robot prototype.

“This machine could potentially be a game changer for growers, particularly those in the Sydney basin and while it is in the prototype stage it is a perfect opportunity for farmers and other industry partners to have input into its design and functional capabilities,” he said.

“I encourage anyone interested in viewing this technology up close to take advantage of the opportunity to talk to representatives from ACFR on their innovative work in the farming robotics space.”

“The digital farmhand started from a philanthropic gift to the University of Sydney to look at developing low cost digital technologies that would support Australian farmers,’’ Prof Sukkarieh said.

“It’s currently at a very high level prototype stage and over the coming months we will be demonstrating it on operational farms.

“We believe it will help farmers with many of the laborious tasks as well as provide valuable crop information,” he said.

Guest speakers from AUSVEG and ACFR will present on the day covering topics including soil borne disease management and control options, updates on exotic pest plant biosecurity as well as opportunities to boost on farm productivity through the VegNet NSW project.

“Dr Len Tesoriero from NSW DPI will also present on the latest research and development carried out on a multi faceted approach to soil borne disease management,” Mr Plunkett said.

The event will run from 12pm to 3:30pm at the Greater Sydney Demonstration Farm in Richmond on Friday, June 23. 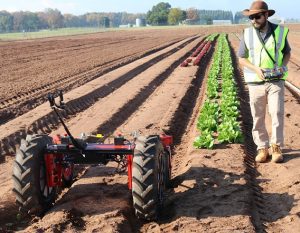 Get to work: Javier Martinez takes the digital farmhand robot prototype for a spin.

More than 40 years experience in the news media, most of them as editor of local newspapers across the Sydney metro area, but a few years working as a sub-editor with the metros. Lots of awards, both as a reporter and editor, but says he values just as much Community Service Awards from Campbelltown City Council in 2004 and 2016. Took a voluntary redundancy in 2014 from Fairfax Community Newspapers after 21 years there. Loves the digital world, because ''there's no question it's the future''. Eric promises his hard hitting but fair approach won't change when he reports the news via cyber space.
View all posts by Eric Kontos
Live and Local: Camden main street venues host new music festival
Eagles will focus on Magpies clash in Indigenous round celebration

2 Responses to Digital farmhand: robot could be game changer on the land