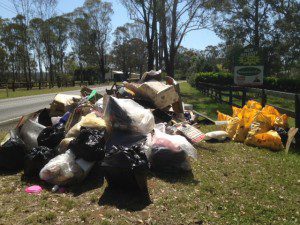 Some of the rubbish picked up by Wallacia residents – and Liverpool deputy mayor Peter Ristevski.

Liverpool deputy mayor Peter Ristevski did more than just give residents of Greendale Road in Wallacia a pat on the back for looking after their local environment after they initiated a thorough clean-up of the area.

More than 40 people participated in the clean-up, which was a local community-led initiative assisted by Liverpool Council.

More than 12 kilometres of Greendale Road was cleaned-up with 22 bags of bottles and cans collected, 70 large general waste bags filled and other items such as mattresses, tyres and a 44 gallon drum removed from the area.

Council provided cleaning equipment to the volunteers such as bags and gloves and contributed to a free BBQ for participants.

On the day of the clean up, Councillor Ristevski rolled up his sleeves to help local volunteers clean-up the area and said residents should be proud of their achievement.

“Liverpool residents have a great reputation for caring for their local environment and this initiative demonstrates we have a fantastic group of people who can come together and achieve positive outcomes for their local community,” Cr Ristevski said.

“Liverpool City Council is working hard to make this city clean and green and with our local residents’ help we are achieving that goal.

“I wish to thank the many residents of the area who turned up on the day and congratulate them for their great work in cleaning up their local environment.” 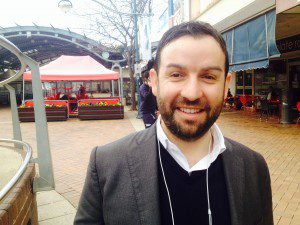 Council encourages residents to do the right thing and dispose of their rubbish lawfully.

Council’s recently-opened Community Recycling Centre, the first of its kind in Sydney, is a free service for residents to drop off unwanted household waste such as gas bottles and computers, while council’s free pick up service allows residents to dispose of other items such as mattresses not disposable through regular kerbside collection services. The centre is open Monday to Saturday, 8am to 3pm.

Ghosts, Lions suffer first round defeats
Lifejacket campaign aim is to save lives