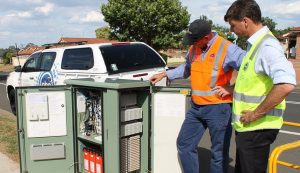 Hold the line: Angus Taylor has given the thumbs up to new NBN customer service standards.

NBN Co (National Broadband Network Co) will be forced to pay rebates to retail service providers – such as Telstra, Optus and other providers – for poor connections, fault rectifications and missed appointments caused by NBN Co.

Federal Member for Hume Angus Taylor, who has welcomed the announcement of penalties, said that he would be pushing for the rebates to flow through as discounts for customers.

“It’s important that NBN customers, of which there are more than 40,000 in Hume, see the NBN being held to account for poor customer service,” Mr Taylor said.

“I urge the telcos to pass on any rebates from NBN as discounts to customers.”

As of this month, 44,000 premises in the electorate of Hume have been connected to NBN fixed line, fixed wireless or NBN satellite services, with the NBN rollout 94 percent complete across Hume.

In the north of the electorate, NBN take-up rates in areas that are ready for service are higher than elsewhere:

Mr Taylor said penalties would be enforceable under section 87B of the Competition and Consumer Act, as part of a range of consumer safeguards being implemented.

As a result of measures from the Commonwealth Government and NBN Co, congestion across the fixed line network has fallen from an average of around five hours a week in July 2017 to just 28 minutes a week, and more than 90 per cent of homes and businesses now have their equipment installed correctly the first time.

More than 40 years experience in the news media, most of them as editor of local newspapers across the Sydney metro area, but a few years working as a sub-editor with the metros. Lots of awards, both as a reporter and editor, but says he values just as much Community Service Awards from Campbelltown City Council in 2004 and 2016. Took a voluntary redundancy in 2014 from Fairfax Community Newspapers after 21 years there. Loves the digital world, because ''there's no question it's the future''. Eric promises his hard hitting but fair approach won't change when he reports the news via cyber space.
View all posts by Eric Kontos
Miranda Devine says women better at bullying than men
Labor to slash train fares to airport if it wins government