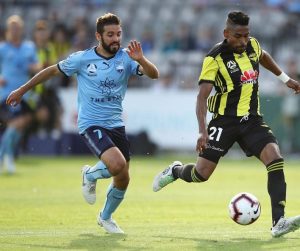 Macarthur’s own A-League team won’t kick a ball in anger until August 2020, but Campbelltown Sports Stadium will offer local football fans plenty of action before that.

To start with, Campbelltown Sports Stadium has been announced as the venue for a match between A-League teams Wellington Phoenix and Sydney FC on February 23 next year as part of the current season.

This announcement comes on the back of the news that the stadium will be the home of a Macarthur South West Sydney United A-League team commencing from the 2020-21 A-League season.

The Phoenix and Sydney FC clash is expected to attract fans across the greater Sydney region and New Zealand.

This will be the return of both teams to the area, with Sydney FC having played an A-League match at the stadium in 2012 while Wellington played FFA matches against the Western Sydney Wanderers at the venue in 2016 and 2017.

“We are thrilled to welcome back the Wellington Phoenix and Sydney FC to compete at our stadium,” Mayor George Brticevic said.

“Wellington Phoenix choosing our stadium as its preferred ground for this match is proof that our venue has what it takes to be the permanent home for an A-League team.

“We look forward to hosting the match and promoting the A-League across the region in preparation for Campbelltown Sports Stadium to be a permanent A-League venue in 2020,” Cr Brticevic said.

“The level of support and the strong football fan base that is evident in our city is one of the key reasons the venue was selected for this match.”

Tickets start from $7.50 for kids and $15.00 for adults. Tickets will be available from www.ticketmaster.com.au