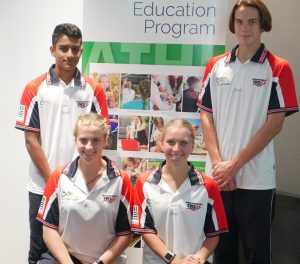 More than 50 of our region’s best young athletes from Camden and their coaching and support staff members have been recognised for their individual achievements.

Venue for what was a spectacular night of sport story highlights and academy athlete recognition was the ultramodern Camden Council chamber at Oran Park.

The athlete recognition night is an annual event, and is also an opportunity for SWSAS athletes to practice and enhance their public speaking and media skills, with three current athletes undertaking the role of personal story tellers.

Manny spoke of her 15 hour per week multi-discipline triathlon training schedule, whilst Vella provided an enthralling insight into his mental preparation for golf, his excellent 4 handicap and recent hole in one.

Davies spoke of his dream to represent Australia in softball and the goals he has set himself to get there.

Each athlete also provided a personal in-depth insight into their athlete lives, including their biggest supporters, sporting heroes, greatest achievement and goals for the future. 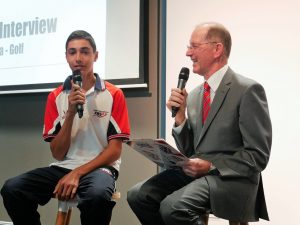 Hole in one: SWSAS golfer Brandon Vella provided some amazing insights into his fledgling sporting career to executive director Gerry Knights and a captive audience, at Camden Council’s athlete reception.

At only 13 years of age, Nakeisha Brimble, an athletics track and field jumper, delivered an inspirational concluding speech, urging all young athletes and coaches in attendance to take responsibility for their own personal sports development and continue to work hard to achieve their goals.

Mr Campbell reminded everyone present that Camden Council was an academy foundation council.

He also thanked Camden Council for its ongoing, outstanding support of the Academy.

If you are an individual athlete between the ages of 13 to 20 who would like to apply to become a part of the South West Sydney Academy of Sport, contact the Academy on 4627 7622, or email gerry.knights@swsas.org.au

More than 40 years experience in the news media, most of them as editor of local newspapers across the Sydney metro area, but a few years working as a sub-editor with the metros. Lots of awards, both as a reporter and editor, but says he values just as much Community Service Awards from Campbelltown City Council in 2004 and 2016. Took a voluntary redundancy in 2014 from Fairfax Community Newspapers after 21 years there. Loves the digital world, because ''there's no question it's the future''. Eric promises his hard hitting but fair approach won't change when he reports the news via cyber space.
View all posts by Eric Kontos
Lakeside Golf Club caps memberships
Ed.Square: demand sky high for urban village at Edmondson Park