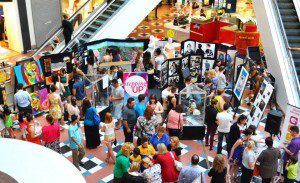 The Stepping Up exhibition is back at Macarthur Square in February.

For the past two years it has become a special addition to the local shopping experience during February.

Stepping Up is a HSC major work showcase in Macarthur Square’s centre court and is back for a third edition in 2015.

It will be officially launched by the federal member for Macarthur, Russell Matheson, between 4 and 6pm on Monday, February 16.

Stepping Up is a youth led and organised cultural event which provides an opportunity for students to display their HSC art works in public spaces.

One of the people behind Stepping Up is Ingleburn’s Natalie Wadwell, an art and design honours student with the University of NSW.

“Whether travelling down the escalator, popping in for necessities or having a catch up over coffee at Macarthur Square make sure you check out Stepping Up,’’ says Ms Wadwell.

And this year, after being trialled at the 2014 opening, the music program of Stepping Up has been expanded to include two days of live performances in Kellicar Lane.

On two consecutive Saturdays, February 14 and 21, patrons will be able to watch and listen to students’ performances at both lunch and dinner time.

Ms Wadwell says this expansion has been made possible by the support of Jacob Nicastri and his team at Utopia Music in Narellan.

“We have a lot of art and music coming together,” Mr Nicastri said.

“This is a really good thing because they work really well together.”

The visual component of the exhibition in Macarthur Square centre court will also have a fresh look in 2015.

“This change has been made possible through a new partnership with the small business, Penrith Fencing and Fabrications,’’ Ms Wadwell said.

“Whether drawing, painting, sculpture or photography appeals to your taste, Stepping Up maintains its efforts to present a diverse display of students’ artwork.

“With a new look and increased opportunities for students to showcase their talents in public spaces across the Macarthur region, the program continues to promote the positive actions of young people within the Macarthur community.’’

A second display will be on at Narellan Library from Tuesday, February 3.

More than 40 years experience in the news media, most of them as editor of local newspapers across the Sydney metro area, but a few years working as a sub-editor with the metros. Lots of awards, both as a reporter and editor, but says he values just as much Community Service Awards from Campbelltown City Council in 2004 and 2016. Took a voluntary redundancy in 2014 from Fairfax Community Newspapers after 21 years there. Loves the digital world, because ''there's no question it's the future''. Eric promises his hard hitting but fair approach won't change when he reports the news via cyber space.
View all posts by Eric Kontos
New Aussies celebrate good fortune with big smiles on Australia Day
What do you think of council’s online approach?