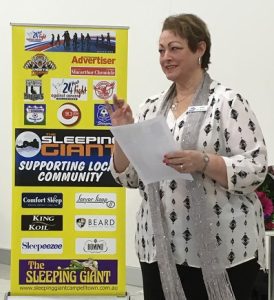 Local, local, local: Sue McGaritty at today’s launch of the 24 Hour Fight Against Cancer campaign for 2016.

Sue McGaritty said it best towards the close of proceedings at today’s launch of the 24 Hour Fight Against Cancer campaign.

“If I was doing a PhD, this is what I would do it on,’’ Ms McGarrity said of the annual campaign.

And of course Sue is absolutely right when you look at the incredible results produced by a very hard working committee.

There’s too many to mention here, so if you want to look them up visit the 24 Hour website here.

Following today’s official launch at Clinton’s showroom in Blaxland Road, the 24 Hour campaign is shooting for its next fundraising milestone, $4 million.

After 11 years they have raised more than $3.3 million, so they’re not that far away from their goal.

The money has gone towards improving the treatment of local people who have cancer.

The Oncology ward, the Macarthur Cancer Therapy Centre and the Pediatric Ambulatory Care at Campbelltown Hospital are all beneficiaries.

As is the Palliative care unit at Camden Hospital, which is set to get six new beds in the next 12 months, the launch was told.

Now the thing to understand is that there’s more to the 24 Hour Fight Against Cancer than a 24 hour walk around the Campbelltown athletics track in October.

There are other fundraisers which have become integral parts of 24 Hour, such as the golf day organised by Warren Morrison of the Sleeping Giant Campbelltown on (July 25), the Paul Nunnari School Push (September 16) and the Hollylea Road festival (November 13). 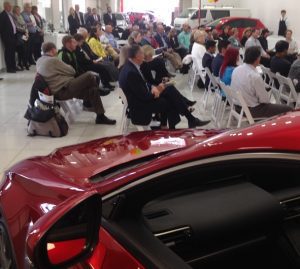 Reason for the shiny new car is that the launch is held in the Clintons showroom every year. 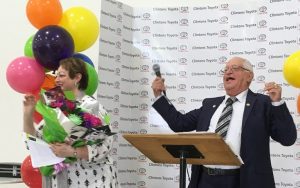 More than 40 years experience in the news media, most of them as editor of local newspapers across the Sydney metro area, but a few years working as a sub-editor with the metros. Lots of awards, both as a reporter and editor, but says he values just as much Community Service Awards from Campbelltown City Council in 2004 and 2016. Took a voluntary redundancy in 2014 from Fairfax Community Newspapers after 21 years there. Loves the digital world, because ''there's no question it's the future''. Eric promises his hard hitting but fair approach won't change when he reports the news via cyber space.
View all posts by Eric Kontos
Give TAFE a fair go, says Labor
Poignant photographic exhibition captures bond between Anzacs and Lemnos