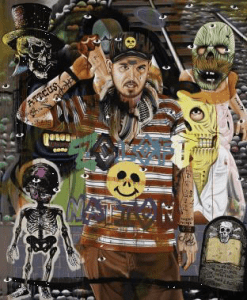 Between Nature and Sin, the first major survey of David Griggs, an Australian born, Philippines based artist, will go on exhibition at Campbelltown Arts Centre next month.

Curated by Megan Monte and presented by Museums & Galleries NSW, the exhibition will bring together portraiture, photography and film developed in Manila, Griggs’ adopted home over the past 12 years.

Griggs, Archibald Prize finalist in 2007, 2009, 2013, 2014 and 2016, explores the darker undercurrents of human existence and the entrenched social issues of the city, and the community of Manila.

The exhibition will also see the premiere of Griggs’ major feature length film Cowboy Country, one of his most ambitious projects to date which further exposes the profound personal impact of Manila’s culture and people on his practice and way of life.

The film was a collaboration with Filipino film royalty, including Soliman Cruz, the late Dante Perez, and Melanie Tejano.

“David Griggs landed in Manila 12 years ago after receiving an Asia Link residency and decided to make it his home,’’ explains Michael Dagostino, the director of Campbelltown Arts Centre.

“He immersed himself in the vibrant street and underground culture, gaining an intimate knowledge of the city’s social hierarchies and cultural fabric.

“Twelve years in the making, Between Nature and Sin is poignant narrative layered with personal stories, tribulations and defining moments of adjusting to life in Manila, a city he says ‘tests him constantly’ but inspires him to keep creating.”

In addition to cowboy country, other exhibition highlights include Griggs’ project New York London Paris Rome Manila City Jail (2009), which was produced collaboratively with inmates of the Manila City Jail.

Also, Zombie Kiss and Frat of the obese, which combine borrowed motifs, symbols of popular culture and street stories stolen from the Manila underground scene to articulate the unjust political and social structures of the Philippines, through the eyes of the artist.

After showing at Campbelltown Arts Centre (August 5- October 15), Between Nature and Sin will tour to nine galleries across Australia. 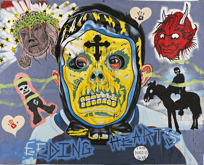 More than 40 years experience in the news media, most of them as editor of local newspapers across the Sydney metro area, but a few years working as a sub-editor with the metros. Lots of awards, both as a reporter and editor, but says he values just as much Community Service Awards from Campbelltown City Council in 2004 and 2016. Took a voluntary redundancy in 2014 from Fairfax Community Newspapers after 21 years there. Loves the digital world, because ''there's no question it's the future''. Eric promises his hard hitting but fair approach won't change when he reports the news via cyber space.
View all posts by Eric Kontos
Sales centre construction marks Edmondson Park Town milestone
Two more female officers charged with historic child sex offences at Reiby